In response to Tania Bruguera’s call for actions to mark ‘International Migrants Day’ Weeks and Whitford made a precarious camp with wooden pallets, a tarpaulin, some food and water, a fire, and candles on the shifting sands of Penzance beach. As the tide came in they rushed to move further up the beach dragging their palettes, fire and belongings out of the surf. In between moving Weeks would read from ‘Rabbit Stew And A Penny Or Two’ Maggie Bendalls autobiographic text about her life as a Romany traveller. Inevitably eventually they were flooded, their clothes soaked and the fire swamped. This work has opened an exploration of their identity as two people of Romany descent with unrecorded, lost family histories, as two people who have been shaped by migration over generations and who subsequently do not belong
in any one place. 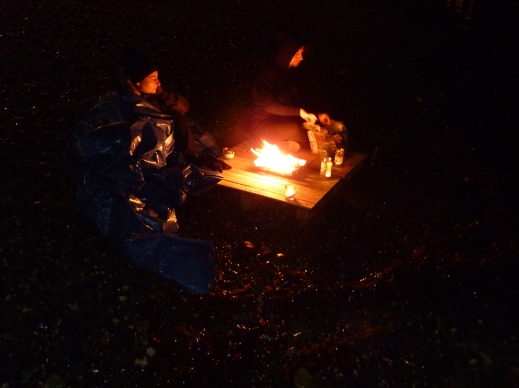